The centre is designed by Glenn Murcutt, one of the world’s most renowned architects, in collaboration with Hakan Elevli of Elevli+ Architects. Both architects have a vast portfolio of works of a standard that far exceeds expectations. Murcutt himself is the only Australian recipient of the Pritzker Architecture Prize which is awarded annually to “honour a living architect whose built work demonstrates a combination of those qualities of talent, vision and commitment, which has produced consistent and significant contributions to humanity and the built environment through the art of architecture. The result of such a fine collaboration between these two architects is an architectural masterpiece that perfects Australian Vernacular Architecture with Islamic Principles of Design. 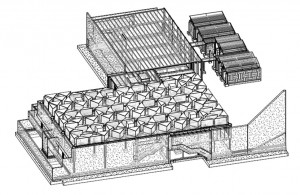 The AIC adopts Murcutt’s ethos of design; contextualising a building to ensure it maximises its climatic conditions. The AIC blends harmoniously with context. A Masjid does not require a specific aesthetic for it to serve its purpose as a place for prayer. It can adopt local forms in a non-Islamic context and in no regard will it minimise any reward of congregation.

Murcutt specified modern representations of vernacular materials such as rammed earth walls, exposed concrete with formwork joints and tie holes exposed, and bluestone pavers to relate the design to the context; the industrial history, local bluestone quarries and rich Aboriginal heritage. Murcutt adopts his traditional ethos of design and moulds it to create a space that is true to its users.

Some members of the Islamic community questioned Murcutt’s proposal to eliminate the minaret as a symbol of the faith. He states that: “Although it had been the place for the calling of prayers, that was not likely to happen today in Australia.” The purpose of the minaret is to make a call to prayer, the adhan. It may be compared to the traditional role of church bells, the sound of which in the modern world tends to be a little more than an echo of a long distant past. The adhan, however, is still as much a part of the culture of Muslims today as it was for past generations, however, its announcement in a Western context is purely internal- avoiding disruption to local communities of a different faith. The minaret isn’t necessary in a Western context, as its function cannot be utilised. Putting the minaret into context is important to ensure the Masjid develops as it was first intended- to allow the form to follow the function.

Murcutt’s approach to design revolutionises the elements of a Masjid. He analyses the traditional elements of a Masjid; Entry, structure, geometry, order, light, minaret and dome to re-interpret the typical elements of a Masjid. Instead of the often-standard inclusion of a dome as another symbol of the Masjid, this Masjid incorporates lanterns that extend over the main roof. The many lanterns are triangular in plan and are orientated in four directions to capture the light at the different times of each day, taking on subtle variations in light quality as the sun progresses from sunrise to sunset. A shallow pool lies at the Qibla Wall, which will be utilised to reflect the afternoon sun into the prayer hall and allow the movement of the water to reflect onto the ceiling and walls.

After taking a fundamental contextual approach of design to the Masjid tradition, Murcutt realised the importance of the local community in the inception of this Masjid. Although he decided to make the functions of the Masjid enclosed, the external covered entry at the ground floor is occupied with the formalities of washing. It has fully glazed doors that open for the community to be able to participate or witness events celebrated by the Islamic community. Upon entrance into the AIC you are greeted with a subtle gesture of open-arms as a re-interpretation of the Minaret.